Welcome to Friday, I have a new to me author for you. DARK REFLECTIONS  by Kelsey Ketch . 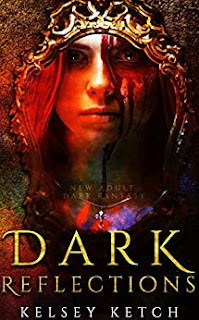 Being possessed by a vampire sucks!

Alana Jones’s world has been completely turned upside-down after being bitten by a vampire’s reflection in a cursed mirror. Now she’s forced to stay in an abandoned Victorian inn on an isolated island off the west coast of Florida, where Alana lives a double life: one as herself and one as a vicious murderer. Over the past year, she has spilt and drunk the blood of sixteen victims. The guilt of their deaths slowly eating away her sanity.
Sixteen dead . . .
However, things become even more complicated when Alana finds Cole, a surfer she felt a connection with the moment they met on the mainland, locked up in the island’s shed. Knowing his death is inevitable, she attempts to distant herself from him, continually reminding herself of the monster residing underneath her skin. Unfortunately, it’s a small island, and the more she interacts with Cole, the more her feelings grow for him.
Eventually, she has to make a decision. Either accept his fate or find a way to expel the vampire’s spirit from within herself before she murders him as well.
MY REVIEW
Alana's life has been turned completely turned upside down after being bitten by of all things a vampire's reflection.  So now during the day she is in control but at night the vampire  comes out to play . Living on a old plantation and when a new man comes to the island and Alana comes to care for him . Will they survive the curse and come out the other side and will love prevail.
This is a story that will have you wanting the main character to survive so much. Alana is a young woman who is going a whole lot of agony . She is possessed by a vampire and kind of given up until Cole comes along .  Then she really starts to fight and become a strong girl that wants to fight for her life . Cole is a sweet guy who wants to have a life with Alana and will do anything to help her break the curse . They are strong together and grow stronger as you read .
This is a good story line and the characters are well written . The author has a way of taking you to the edge and then pull you back in .  The story has a vampire and ghosts that are haunting this poor girl . The murders are gruesome and the twist at the end is really great . The only thing that I feel is that the book could be streamlined just a little . It seems like the author has over explained some things and became a little wordy through out the book . Over all I did enjoy this book and would like to read other things from this author . So if you want a good book for this Halloween take a chance .
.
Posted by BOOKS TO CURL UP WITH at 2:22 PM