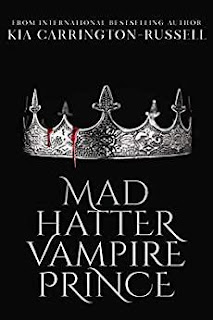 A PREQUEL NOVELLA TO THE TOKEN HUNTRESS SERIES. CAN ALSO BE READ AS A STANDALONE.

Kyran Klaus is the prince of Grand Klaus, his reputation honoring him the title of the Mad Hatter Vampire Prince. Crazy, deadly, lustful, and utterly bored with life.

Sasha Pierce is one of a kind. Having been experimented on by her mother as a child, she’s become a human weapon who’s looking for answers beyond the walls where her kind aren’t enslaved to vampires.

When the Mad Hatter Prince takes a sudden interest in Sasha and her work, she scarcely begins to cover her tracks and hide her secrets. What she doesn’t anticipate is being a pawn in his most sinister performance yet.

Disturbingly Wicked! This novella is not for the fainthearted. Lust, Gore, Wit, and Malicious Humor. Prepare to be deliciously tainted. 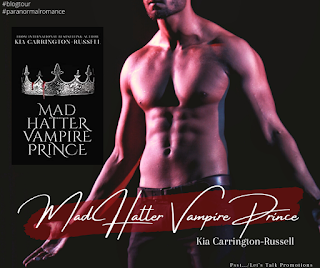 “Sasha you seem like an angry person,” I began as point of conversation. I set my blue china cup down and uncrossed my legs. “Maybe I can teach you to loosen up. I’m certain that eventually you will be so daring as to give me a smile.”

She stared at me in disbelief. “Many of my men and women have died protecting your walls… so you can have tea parties. Forgive me that I don’t see light-hearted humor in this meeting.”

“You’re forgiven.” I shrugged my shoulders accepting her insincere apology. “So obviously no boyfriend then?” I asked, crossing my legs. Not that I cared if she did. It would make no difference to me. If looks could kill, I’d be dead. I let a coy smile out. How I delighted in that hatred. I picked up my tea, taking a mouthful of the coppery herbs. I was praying on the beating vein in her neck. I could be consuming the very creature sitting before me instead of entertaining her in this sophisticated stage that I never used. “Tell me Sasha, how do you see me?”

She responded without hesitation. “I think that you’ve gone crazy during the hundreds of years that you’ve lived. You lack in ambition and act as your brothers lap dog. I’m surprised very few have attempted to take your life and genuinely believe that your arrogance will be your undoing.”

I furrowed my eyebrows in confusion. “No, no, I meant my looks. Are you attracted to me?” She looked at me dumbfounded and I charmed her another smile. “Play with me.”

She looked away with a sigh that sounded imprisoned for eternity. I took a loud sip to draw her attention back to me. Tick tock. Tick tock. The mouse will come around the clock. She turned again and straightened her shoulders. Much to my shock she flashed her pearly whites with a smile that I thought I would never see.

“Well,” she purred. “You look to be a man in his late twenties. You have pale, smooth, and beautiful skin. Well built in frame, muscular, six foot six in height. You have nice trimmed black hair with a little bit of shadow instead of a full-grown beard. You have a strong muscular jaw and pointed nose with bold dark eyebrows that so beautifully frame those piercing blue eyes that seem to look into my soul every time our eyes meet. You hold a daring confidence that lets any woman in the room know that you are no good for her.” I prompted her to continue. This was the conversation I had been waiting for in the last twenty-four hours. She provided pause and I took that in with a smile. She was attracted to me. “Such a beautiful man, such an intoxicating vampire. And yet,” the charming smile she held vanished. “I find myself utterly repulsed.”

I slowly put my tea down not letting my gaze drop from hers. “Are you certain repulsive is the word you meant to use?”

“You know I could have you dead for saying such a thing to me.”

“There are worse things than death,” I added, taking interest in her selection of teas. This entire setting was too much even for me. The herbs were disgusting, and my cup of blood was already going cold.

“The only thing that is worse than death is defying it,” she said looking up at me. 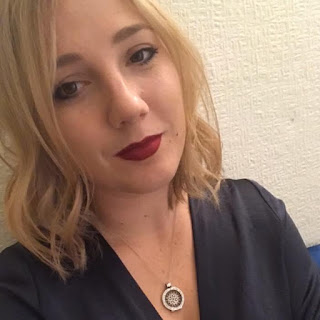 Kia Carrington-Russell grew up in the Darling Downs Region in Queensland, Australia. Originally, she pursued a career in freelance journalism, before giving into her passion for writing fiction in 2014.

Announced “The Best New Author of 2015” by AusRomToday, Carrington-Russell has received numerous awards and acclaim.

a Rafflecopter giveaway
Posted by BOOKS TO CURL UP WITH at 8:08 AM