Good morning peeps today we are going to celebrate a new release and a new author. Enjoy 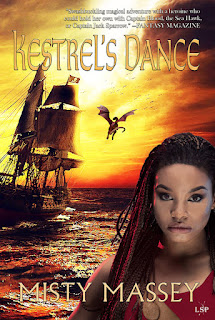 Kestrel, the King's Privateer, is preparing to wait out the annual storm season when she receives an unexpected royal order to capture and deliver a rare creature for the king’s menagerie. Before she can weigh anchor, news reaches Kestrel of a long-ago friend in desperate need of help—in the opposite direction of her assigned voyage. In addition, her ship may be haunted by something big, loud, and terrifying.

Before Kestrel can plot a course, she crosses paths with an enigmatic dancer who offers an enticing bargain: sail her home to the Continent, an ocean away, and she'll reveal the mysteries of magic Kestrel has longed all her life to know.
The temptation of answers endangers her crew and might ruin her privateer status. Worse, taking on this passenger could thrust her into the clutches of the ever-watchful Danisoban mages who lie in wait for her to make the perfect mistake.
Every decision is fraught with danger. Each wrong turn may mean her death or the death of her crew. And Captain Kestrel can walk away from none of them.
Buy Links:
Check it out on Amazon: http://mybook.to/KestrelsDance
Check out Book One: http://mybook.to/MadKestrel​
Author Bio:

Misty Massey is the author of Mad Kestrel, a rollicking adventure of magic on the high seas, Kestrel’s Voyages, a collection of short stories featuring those rambunctious pirates, and the upcoming Kestrel’s Dance. She is a co-editor of The Weird Wild West and Lawless Lands: Tales of the Weird Frontier, and was a founding member of Magical Words. Her short fiction has appeared in many anthologies and she’s working on a series of Shadow Council novellas for Falstaff Press featuring the famous gunslinger Doc Holliday. When she’s not writing, Misty studies and performs Middle Eastern dance and will, on occasion, surprise everyone with a batch of home-baked snickerdoodles. She’s a sucker for good sushi, African coffee, SC Gamecock football, and the darkest rum she can find. You can keep up with what Misty’s doing at mistymassey.com, Facebook and Twitter.​ 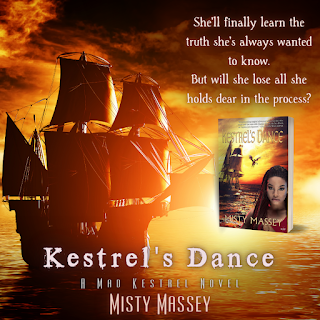 Excerpts
“You became the Privateer.”
Her eyes widened. “You think I had a choice? Perhaps you weren’t listening right then, but it was either take the job or submit to the Danisobans.”
“You underestimate yourself. It was fear that made you think so.”
“You’re calling me a coward?”
“Hardly. But the king named you Privateer, awarded you a ship. The Danisobans couldn’t lay hands on you if you stayed at sea. You were delighted to sail away from me.”
“Delighted?” She rose, closing the distance between them. “You walked away! Hung this bloody bauble on my neck and disappeared into the crowd. You say you had feelings — well, cack you and your feelings. You turned from me without a backward glance. Or was I supposed to put on a dress and follow you, like some proper little wife?”
“As if you could be such a thing,” he said.
Kestrel swung a fist at McAvery’s face. With snakelike quickness, he grabbed her arm. “I meant no insult. You have to stop believing the worst in me.”
She stared at him, so close. Slowly he pulled her up tight against him, one hand sliding behind her head, and kissed her. His lips weren’t soft this time, but desperate and burning. The warning voice in her head whispered something about pushing him away, refusing him. But she didn’t listen. Didn’t want to. She’d waited too long for this to happen. She wrapped her hands in his hair, slipping it out of its queue. She pressed herself against him, relishing the feel of his body so close.
He raised his head, his breath coming hard. His cheeks were flushed, his eyes fervent as he gazed at her. “Have me flogged if you must, Captain, but I won’t apologize for that.”
a Rafflecopter giveaway URL: http://www.rafflecopter.com/rafl/display/9751c04276/?
Posted by BOOKS TO CURL UP WITH at 7:32 AM