Good afternoon everyone hope your Tuesday is going well . Today I have a rebranding of a fun series by Hp Mallory and J.R Rain . AFRAID OF THE DARK  ( Midlife Spirits book one ) 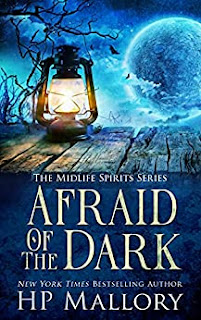 Do you believe in love after death? I didn’t, until now…

Looking for a fresh start, I just became the proud owner of a piece of New Orleans history: an Antebellum-era two-story house in the Garden District.
It’s going to take time and a fat wallet to restore the fixer-upper to its former glory, but after my recent divorce, I could use the distraction. And a stiff drink, but that’s another story…
It’s not long before I discover I’ve moved into the haunted house of the flirtatious and very much dead Drake Montague. Now I’m receiving kisses from unseen lips and caresses from ghostly hands. Soon I even begin to have vivid dreams, bringing me face-to-face with the incomparably handsome ghost of a 20th-century French policeman.
Meanwhile, I’m also growing closer to my general contractor, Ryan Kelly—who is as charming as he is alive.
The chill in the air could only suggest Drake’s jealousy from beyond the grave... men, right?
Even though I’m definitely attracted to and interested in Ryan, I also can’t get Drake out of my dreams or my heart as I begin to uncover the frightening truth behind his death a century ago.
MY REVIEW
Peyton has just bought her own piece of New Orleans's history a big beautiful ante bellum house in the Garden District.  Well she got more then she bargained for when she moved in . She starts to vivid dreams about a young police officer and that with touches from ghostly hand and kisses coming from nowhere all from the debonair French police officer . Wait theres is more to the story Peyton is also starting to fall for her handsome contractor Ryan Kelly well who is very much alive . Wait it gets better Peyton has two suitors and a mystery how the dashing police officer died over a century ago,
I really love these characters . Peyton is a sweet woman who has been through a divorce and starting her life over again. She is as tough as nails when she needs to be but also knows when to get help when she needs . Ryan well he is a guys guy who has a heart of gold and will do almost anything for a friend or girlfriend . Even chase ghosts and help her fix up her house . He is like the best boyfriend material out there reliable , sweet and kind.  Drake well he is a manly man who is debonair and suave , man he is suave . He is like the hero in every romance book you read . Too bad he has to be a ghost.  They are such fun characters to read and you will love them .
This is a rebranding of a series that I have not read by this author. I am so glad I finally started this series . I am liking the rebranding of it . The authors have a way of writing that will make you fall of the chair cause you are laughing so hard . There are moments that I really snorted hard while reading. I will admit it did take me a couple of chapters to get into the story but once I did I was a goner . So if you want a fun, snarky laugh out loud book check this out and add it to you summer reading list
Posted by BOOKS TO CURL UP WITH at 2:08 PM