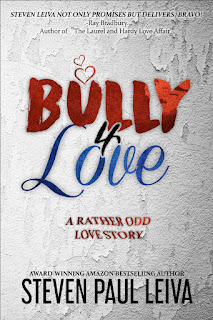 "She walked into my classroom ten minutes early on the first day of the Fall 1990 semester at South Pasadena Adult Education. I sat at my desk with my head down, going over notes and a sheet of mandatory announcements.
It was not hard to hear the entrance, which came with a slight swish to it. I raised my head to greet my first adult education student.
She stood just in from the door: a person—a woman—a person, unlike any person I had ever seen or, indeed, have ever seen since, for she was radiant. Radiant—a not unusual adjective and often a metaphor—but at that moment, as she stood there, and as I possibly held my breath, the word was an utterly accurate adjective that was just barely a metaphor."
Thus begins a very odd love story.
Adolphus. Lavinia. Eugene. Peggy. Who loves who?
Love rejected. Love ignored. Love found and pizza
EXCERPT

As she stood in the classroom musing on where to sit, I, not perceivably, I hope but certainly shamelessly, mused upon her. She was about five-foot-five, but this was a guess as she stood in elegant high heels. She wore a dress. A dress! Not blue jeans and a tee-shirt, not fatigues from an Army Surplus store, not anything gangsta-rappers or hip-hopish. Nothing rock n’ roll, nothing punk, nothing anti-establishment, nothing that thumbed its nose at convention while, of course, being within her generation entirely conventional. But a dress, a full dress with a billowing skirt, a wide belt that cinched the waist, and a top featuring a v-neck opening and an extended collar upturned in the back. It was white with a pattern of the repeated image of blue flowers—irises, I think. Yet it was subtle, not overdone. She wore a string of blue beads around her neck, set off by the ivory-like skin of her exposed upper chest. She was made-up, but subtly so, with lipstick of a color somewhere between pink and red. She was blonde, and somehow I knew it was natural, although it was not a subject I had ever thought about before in my life: women’s hair color and what was natural and what wasn’t and why what was natural had become unnatural. Her hair fell down onto her shoulders, not chaotically and yet not seemingly styled. But there was still body to it, and even a bit of a wave. She was pretty. And yet she wasn’t. At least not conventionally so. No button nose, no high cheekbones, no well-shaped mouth, all those things that made a face of parts become a whole perfect face. She was striking. Her eyes, which were, I believe, gray, just—I cannot, for the life of me, think of any other word—her eyes just beamed. And she smiled with an irregularly wide mouth, exposing upper teeth that were irregularly long, giving it a somewhat goofy aspect. And yet it was a most pleasant smile to view, a fun smile if that makes sense. Her nose was just a little bit too large, but it did not distract; it was, oddly, attractive. So even though a young blonde of youth and radiance, wearing a dress a gust of wind could blow up, she was no Marilyn Monroe. Especially given the fact that she was thin bordering on skinny with legs that seemed almost like sticks protruding out from the billow of her dress. And she certainly didn’t have the smoldering sexuality of Marilyn. If there was any blonde goddess filmic allusion in her presence at all, it would have been Grace Kelly. Not because of how that star looked and was presented in, say, Rear Window or To Catch a Thief—but because she was the most aptly named woman in all of History.

“I don’t think we need to assign seats in adult education.”

After looking around, she picked a chair three rows back and to my left. 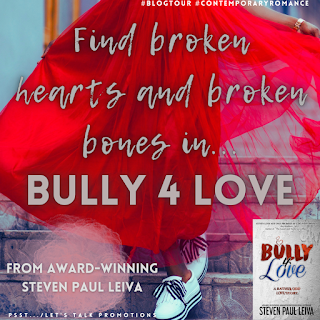 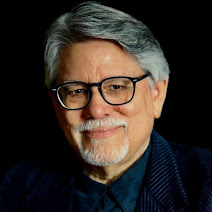 Steven Paul Leiva is a Scribe Award-winner, receiving the praise of literary legend Ray Bradbury and Pulitzer Prize finalist Diana Ackerman. Leiva is no stranger to the business of telling a good story. Author of nine previous novels, and with a writing-style that lays hard on the satire, this Hollywood-escapee doesn’t pull punches when it comes to the zany and the absurd.

Need to know more? Follow him on Amazon or Goodreads, or check out his blog here: http://emotionalrationalist.blogspot.com
Rafflecopter:  a Rafflecopter giveaway
Posted by BOOKS TO CURL UP WITH at 7:18 AM