Welcome back to the start of another week. I hope everyone survived the weekend . Today I have JOSIE( book one in the Deception's series ) by Bobbi Jo Green 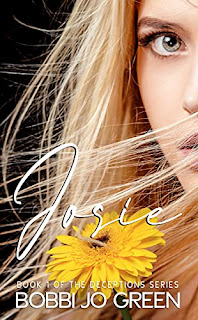 First loves can change your life.

Josie Morris stuck to the shadows and kept to herself. Growing up with an abusive parent didn’t exactly do her any favors. Focused on one goal—get through high school and move as far away as possible—the last thing she expected was to fall in love.
First loves can be the hardest to lose.
Cole Connelly made Josie’s heart sing, and when she fell, she fell hard. Together, they planned to take on the world, but life gets messy and sometimes, love gets caught in the crossfire. Years later, she finds herself miles away in New Orleans, but her heart will always belong to him.
First loves aren’t always safe.
Her best friend pushes Josie to put her heart back out there, but she knows just how dangerous allowing herself to love can be. When a familiar face takes the stage at the bar Josie works at, it forces her to confront the past. The secrets that she tried to bury won’t stay hidden, and not everyone is who they appear to be.
MY REVIEW
Josie has always hidden from the world , growing up with an abusive parent . She didn't want to draw attention to herself until the day she got detention and met the boy that would capture her heart. Cole came into her life like a whirlwind . Together they planned on taking on the world together . Until the day she had to walk away , she didn't want to but she was forced to. Now years later Josie is getting back into the dating game with the help of her best friend . When a face from her past comes into her life and the secrets she hid from everyone will come out and maybe she will get a second chance at first love .
This is a book about redemption and the second chance at first love. The characters are well written and complex .We get to watch Josie go from a shy teenager to a strong woman . She still hides from the world behind her job.  She is stronger then she realizes after everything she went through. Cole looks like he has it all but deep down he wants  love . When we meet him later he is a musician and sexy as sin. Together they work through their past and try to figure out their future. Will first love be able to be rekindled and love prevail.
This is a sweet young adult romance, and a second chance at love .  The author takes us on a rollercoaster ride of emotions . The characters are so well written you really start to care for the characters .  This does have some triggers with alcoholism and abuse so if you are sensitive to those triggers be for warned . I love this story and can't wait to read the second book in the series . So check it out if you want a book that will let you have a second chance at romance . Add it to your summer reading list
Posted by BOOKS TO CURL UP WITH at 6:50 AM