WELCOME TO FRIDAY EVE ALL

Happy Thursday all I hope your week is going good and you are staying cool . Today I have another new author for you and her Sword of Cho Nisi . THE RISE OF THE TOBIAN PRINCESS 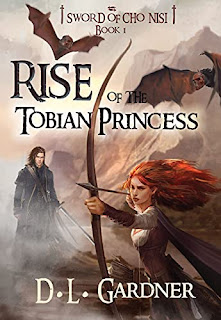 Erika, the youngest daughter of a legendary king, aspires to be a warrior and follows her brother to war against an evil wizard's minions. She makes a fatal mistake during her first battle and kills a king of an allied island whose magic is needed to win the war. When she attempts to right her wrongs, she falls in love with the king's heir and is afraid to admit her mistake. The king's son, now thrust upon a throne he never wanted, pitted against an enemy he never asked for, falls in love with a woman he is forced to exile.

Meanwhile, Erika's brother is captured and held prisoner by the enemy, her father's health is failing, and the survival of the kingdom falls on her shoulders. Can the young leaders of these two nations forget their hostilities in time to rescue their nations?
MY REVIEW
Erika is the youngest daughter of the king . A warrior in her own right she does a fatal mistake during battle and kills the king of a allied island. She attempts to right what she did and falls in love with the prince .Who now has to decide if she lives or dies .All the while falling in love with her . And in the mean time her brother is captured and her father is failing . What is a girl to do when the survival of the whole island falls on her shoulders . Can they forget the bad blood between them long enough to save the islands they love so dearly .
There are quite a few characters in this book and I must say that the author really made each character complex . Erika is a sweet girl but she has the weight of the world on her head . She is tougher then she realizes and when push comes to shove she will do what is right even if it means her life .Prince Arell is pushed into a job he isn't ready for . He is a sweet guy who is under pressure but seems to come out the other side stronger and more reliant . There are so many supporting characters that help with the story and help with the main characters .
This is a book that you could get lost in . The story is a high fantasy romance with characters that are well written and complex . There are twists and turns through out the book that will have you laughing or on the edge of your seat , This book has the potential to be a great book but there are times in the book I felt it was bogged down with description a good going through to tone it back down the over describing. It could be an even better book . Over all i did enjoy this story and would like to see what the author does with these characters . So if you want a fun read check it out
Posted by BOOKS TO CURL UP WITH at 2:59 PM