Good morning all , it is yet another Monday . I hope everyone is having a good Monday . Today I have a great series for you . DAUGHTER OF ISIS  by Kesley Ketch 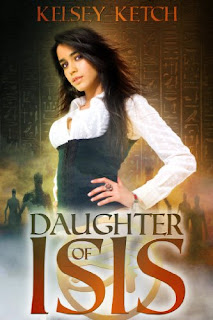 “Her mouth parted slightly, waiting for Seth to breathe life into her own body, just like in the story. She wanted him to awaken her senses.”

Their worlds collide in California’s high desert.
The last thing Natara “Natti” Stone wants to do is to start anew at Setemple High School. She wished she had never left London. Yet the brutal murder of her maternal grandmother has made her life very complicated. The only clue related to her murder is an ancient, encrypted necklace Natti discovered after her grandmother’s death. And if trying to adjust to American life is not enough, Natti is being stalked by a mysterious, charming high school senior, Seth O’Keefe, who is annoyingly persistent in his attempts at seduction.
Seth O’Keefe is secretly a member of the Sons of Set, an order that worships the Egyptian god of chaos. Seth’s blessing from Set, his “charm,” never failed, except with one person: Natti Stone. Her ability to elude him infatuates and infuriates him, and he becomes obsessed with the chase. But the closer he gets to her, the more his emotions take a dangerous turn, and he risks breaking one of the most valued covenants of his order. The punishment for which is a fate worse than death.
The adventure this unlikely couple becomes engulfed in could cost them their lives and their souls.
MY REVIEW
Nattie is not wanting to start her new school , she would rather be back in London and at the school she loved. But ever since her grandmother was brutally murdered her life has been turned upside down . She has a clue to the murder in a necklace she got after her grandmother died . Now she must adjust to school in America and figure out the necklace while dodging the advances of a very persistent senior , Seth O'Keefe who can woo girls like he is gifted . He is more then she bargained for and when push comes to shove will he protect her from himself and the the sect that wants to use her as a sacrifice to the gods .
This is a wonderful story with some great characters, Nattie is a strong girl who is quick with a one liner . There is more to her then meets the eye though. She is exotic and strong . She really doesn't know of her past because her mom died when she was 4 and her grandmother didn't really want to talk about her past .Seth well he is the jock, rich and really kind of a jerk. He is more then what he seems also, he is part of a sect that prays to an  Egyptian God Set , the god of Chaos . His charm is his gift and he uses it on all the girls to get what he wants . We actually  get to see a change in him as he is with Nattie . She is immune to his charm and he is baffled why she is different. These are such fun characters to read , they are complex and well written . I really like them and  loved how they interacted with their friends and each other .
This is such a fun read , I am a sucker for Egyptian mythology and this one has a great set of Gods to read about .  Isis and Set two of the Gods that you actually know about. The author paints a great picture through out the whole book and you will be sucked in by the end of chapter 2 . This is a ya book but I would not let younger youths to read it. There is a premise of rape and I don't think it would be good for ages 16 and under . I think older teens would like this book and I think you would like it too. So if you want a good read for the summer check it out .
Posted by BOOKS TO CURL UP WITH at 6:46 AM